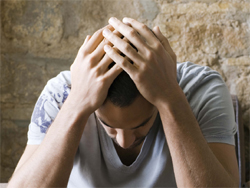 Approximately 25% of the cases charged in Milwaukee County each year are cases involving allegations of domestic violence. Domestic violence cases are defined by the relationship between the parties. A current or former spouse, current or former roommate or a person with whom you have a child can be charged with a crime of domestic violence if either intentional infliction of physical pain or injury occurs or the alleged victim fears for their safety. See sec. 968.075, Wis. Stats., for a detailed definition. All sorts of crimes can be designated as crimes involving domestic violence but most involve allegations of battery, criminal damage to property, disorderly conduct, criminal trespass to dwelling, stalking, violation of restraining orders, intimidation of witness and sexual assault. And these crimes can be charged as either misdemeanors or felonies based upon a whole host of circumstances particular to each individual case.

The first thing you need to do if you are confronted by the possibility of being charged with a crime of domestic abuse of any kind is: SAY NOTHING TO THE POLICE. Anything you say to the police will be used against you in court. The police are experts at getting people to talk. They can lie to you to get you to talk. They will frequently say, “This is your time to get your side of the story out,” or purposefully misrepresent what you are being accused of in order to get you to talk. For instance, police will frequently engage in explaining you are being charged with a battery for striking the alleged victim and encourage you to say something before your arrest to which you may respond, “But I didn’t hit her, I only yelled at her and broke some dishes. I was in the kitchen and using a knife to cut vegetables for a salad at the time.” Well, you just admitted to disorderly conduct and criminal damage to property while armed subjecting yourself to up to 21 months in jail and $11,000 in fines plus costs and surcharges. And this police practice occurs at all types of crime scenes daily. And the lying and misrepresentations are even approved by the courts. So the best advice I can give to you is KEEP YOUR MOUTH SHUT AND SAY NOTHING TO THE POLICE!

Domestic violence cases also carry sanctions more than just a conviction and a possible jail sentence and fines, costs and surcharges. If you are convicted of any crime that has been designated as one involving domestic violence the collateral consequences can be quite severe. If you are here in the country with a visa, you will be subject to deportation. If you are a hunter or owner or collector of firearms you will be forbidden from owning or possessing or collecting firearms for the rest of your life. Violations of this lifetime ban on owning or possessing firearms is a federal offense and you risk being federally prosecuted. If you are married and your spouse files for divorce a conviction for a domestic violence crime can have serious repercussions on any child custody issues that may arise in your divorce.

Police want to talk to you?
Under Investigation?
Been arrested?

SAY NOTHING...nothing without consulting an attorney. Demand to speak to your attorney.

Back to desktop versionBack to mobile version